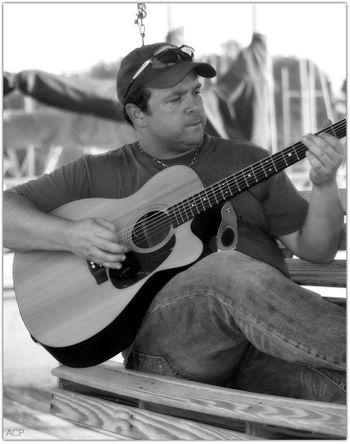 Born and raised in the heart of the Tennessee Valley, Danny Rosado is a Trop Rock, Sandgrass, and Americana singer / songwriter from Huntsville, AL. Danny released his debut solo album, “Beach Boy Coming Home,” in May 2017, and currently performs as one half of the Trop Rock duo, Danny Lowers the Boom. As a US Navy veteran and former Naval Aviator, Danny has developed a deep love and respect for the sea, and his songs reflect that.

Inspired by the musical sounds up and down the Florida / Alabama Gulf Coast, Danny first began to play guitar in 1996, after many a late night at the Florabama. Local legends such as Rusty McHugh and Mike Fincher, Jay Hawkins, Jezebel’s Chillin’ and the Southwind band were major influences during what would be considered his early formative years. The love of the music went hand in hand with the love of the beach and the Gulf Coast vibe.

Danny has been fortunate enough to play in several bands over the years both as the lead singer and front man, but is also an accomplished vocal harmony singer. Danny is equally at home as a solo entertainer, playing his original music and wide variety of covers. He has performed on couches, in historic cities and sailing ships, tiki bars, and for American troops abroad, but these days you will most likely find him somewhere along the Gulf Coast.