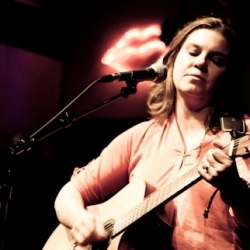 Born in Baltimore, MD, but now living the island life in Key West, FL, Dani Hoy’s mission is to create honest and entertaining ear worms about life and love in an evocative style.

Carrying out her motto, “Better late than never,” Dani started her musical career around the age of 40 and has established herself as a serious songwriter and an engaging vocalist. Her ability to connect warmly with audiences, as well as her adventurous yet vulnerable songwriting style, has garnered her many fans over the last few years. A lover of musical styles from many eras and genres, Dani’s songwriting reflects these varied influences. Passersby on the street are lured into venues by the quality of her vocals when she is performing live solo or as part of the duo The Shanty Hounds.

Her widely anticipated new EP, “At the End of a Long Road,” was released in July 2016 featuring five original songs. Signaling a change in direction in some ways, the music is decidedly more in the Americana style. The EP features Nashville studio musicians under the direction of Orca Sound Studio producer Kevin Johnston include Jerry Roe on drums, Dave Roe on bass and Kenny Vaughn on guitars.

Dani’s second full CD, “Songs of Love and the Ocean,” released in August 2013, was also produced by Kevin Johnston and features a versatile mix of songs from funky pop and rock to country and torch songs. Her song “I Like It Hot” has become a popular hit on internet radio as well as a much requested song at her gigs. Dani and Kevin had previously teamed up on her first project, “TropiGal.” Since that initial release, she has traveled around the country with her Martin guitar to perform and promote her CDs.

Promoting her music to a variety of sources, her songs are currently in the ears of listeners on a variety of web-based and terrestrial radio stations. In addition to songwriting and performing, Dani is cohost and editor of two podcasts, the Key West Music Show: Conch Rockin’ in the Keys and Key West Beer Tales: The Sum of All Beers.

With her recent change in residence, Dani Hoy continues to cover new ground musically as well. She remains focused on songwriting and performance, which are two of her passions, looking toward her next musical release. Live or recorded you’ll love what you hear.

Find out more at http://danihoy.com/