Academy Member: Jimmy and the Parrots 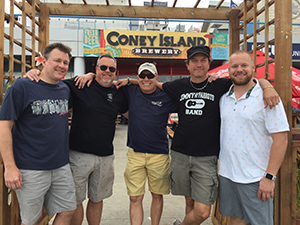 Grab your beach chair, your suntan oil, and your favorite drink, and get ready for a trip to the islands with the ultimate tribute to Jimmy Buffett. For more than 17 years, Jimmy and the Parrots have been playing to delighted crowds all over the United States as well as the Caribbean. Jimmy and the Parrots has been a featured act at the annual Meeting of the Minds Parrot Head conventions in Key West, Florida, for many years. Their Key West performances also included well-known venues such as the the Smokin’ Tuna Saloon, Rick’s Café, Sloppy Joe’s, Schooner Wharf, and Jimmy Buffett’s Margaritaville.

Starting in 2010, and every two years thereafter , the band’s Yeamon Cruise has welcomed hundreds of fans for some awesome floating parties on board both Carnival and Norwegian cruise
ships and have included both on- and off-ship performances at well-known venues such as Senor Frogs in Nassau, Bahamas, Jimmy Buffett’s Margaritaville in Grand Turk, and Jimmy Buffett’s
Margaritaville in Cozumel, Mexico. In July 2010, the band was part of the National Flagship Celebration for the SS United States, and plans call for Jimmy Maraventano’s song about the
ship—“Symbol of America” – to be included in the upcoming updated documentary “Lady in Waiting.”

The band has two CDs of original tunes, “Better Than New” and “Back to the Bayou.” In addition, they released (nationwide) a 30-song, three-CD set entitled “Island Jam,” which has sold over
100,000 units to date. A second three-CD set entitled “Sun Jams,” was released as a follow up to “Island Jam” and includes guest performances by Jimmy Buffett’s Coral Reefer Band member Doyle
Grisham, the legendary Gary US Bonds, and other well-know trop-rock musicians.

Recipients of the TRMA’s “Entertainer of the Year” in both 2012 and 2014, Jimmy and the Parrots truly appeals to all ages and all musical styles.

Find out more at https://jimmyandtheparrots.com/home