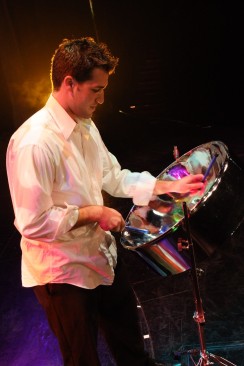 From Singapore to Key West, Manhattan to the Caribbean, crowds of all ages and nationalities have seen John Patti bring the steel pan to the forefront of musical entertainment. Whether in a solo performance or collaboration with bands, John’s intriguing stories and skillful performance leaves long lasting and memorable impressions with any audience.

With a true artist like John tapping the mallets, the pans take on a new life of melodies and styles. His ability to blend Latin percussion and steel drums into various genres creates a refreshing twist on popular hit songs and an exhilarating performance guaranteed to get anyone dancing in their seat.

Originating from Baltimore, Patti ‘s musical journey started early on as he played his first set of drums at age three and continued to learn drums and percussion through elementary and middle school music programs. By ten, he came across his first set of steel pans and quickly started experimenting with the instrument and teaching himself by ear. By age 11, John was publicly performing across the state of Maryland and into the Mid-Atlantic region for special events.

John initially studied music at West Virginia University before pursuing business at the University of Maryland, where he graduated with two degrees in marketing and logistics. He continued to pursue his musical passion and after graduation, performed across the world on luxury cruise ships where he learned the art of production, entertainment and how to craft a captivating show.

In 2005, John entered the studio to start his first solo album Above the Fold, which was released in 2006 as his first take on island jazz. John’s latest releases Cabana Breeze (2010) and A Calyp-Soul Christmas (2012) are classic examples of John’s “Island infused jazz and blues” sound. Many songs from both albums can be heard daily on Sirius/XM Radio’s “Radio Margaritaville”.

Over the years, John’s popularity has grown across the nation for his unique take on the steel pan. John’s expressively smooth sound elevates the steel pan from its perceived impression as just an island instrument to one of versatility across many musical genres. Rock, jazz, blues, country, funk and even classical are all rejuvenated when John combines them with the tropical sound.

Find out more at http://www.johnpatti.com/