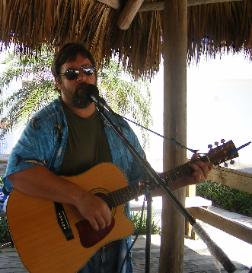 John Friday, the Tropical Balladeer, is a singer/songwriter originally from Maryland, now living in Florida. After a back-breaking (literally) Army career, John settled in the Sunshine State where he pursues his musical dreams every night in the locals pubs and bars.

An eclectic set of interests led John through the gamut of college majors, including biology; education; engineering; mathematics; business (“I’d always made fun of business majors, and suddenly I was one!”); computer science; classics (the most useful part of a classics degree is that you can say “Do you want fries with that?” in Latin!); and finally, one that combined many of John’s interests, History. It took a mere twenty years
to complete his baccalaureate, as little things like raising children and going to war kept him busy. John’s love of History is readily evident, as he will discuss historical events at the drop of a fin-topped hat.

John got his first guitar when he was 13, after attempts at learning the piano and the clarinet were less than successful. For years, John was never far from that guitar. He took it backpacking in the White Mountains of
New Hampshire; while working on a crabber in Chesapeake Bay; even while skiing in Maine & Colorado. He still has that guitar, although his collection has grown somewhat over the years.

When it came time to “get a grown-up job,” John put away childhood dreams and joined the Army. A series of injuries led to a medical discharge after thirteen years of service. Moving back to the Mid-Atlantic region, John
shortly realized that (1) he’d never really grown up and never would, and (2) his childhood dreams of making music were still powerful. Eventually, those dreams led to a southward move. “Dreams…don’t leave childhood
without them!”

Find out more at http://johnfriday.com/