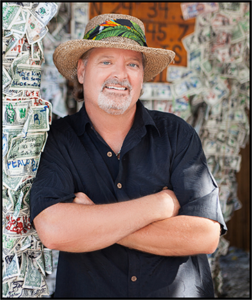 A native Floridian and long-time Jacksonville resident, Jimmy’s been performing both as a solo act and with his band for nearly thirty years. After forming the Ocean Waves Band in 2000, his goal was to entertain audiences throughout the southeast with an island style tropical vibe.
Armed with a combination of acoustic rock heavily influenced by the music of Jimmy Buffett, along with his love for the ocean and time spent in the islands, Jimmy helped pave the way for what would be an up-and-coming musical genre now known as ‘Trop Rock’.

In 2008, Kenny Chesney’s management group hosted a nationwide contest to find the Next Big Star, which Jimmy and his band won in the northeast Florida region. As a result, they were awarded the opportunity to open for Chesney at the Jacksonville Memorial Arena later that year. It was quite a thrill indeed, Jimmy boasts. “We got to play rock stars for a night in front of nearly 15,000 people!”

The music of Jimmy and his band has grown greatly in popularity in recent years. With the release of their fourth CD, I Need a New Island, they’ve established themselves as one of the more well-known acts in the Trop Rock nation. In recent years, Jimmy Parrish & The Waves have headlined many of the larger Trop Rock events in the country. They were awarded the Trop Rock Music Assoc. Horizon Award, and nominated in four more categories including Band of the Year, Album of the Year, Musician of the Year, and Song of the Year.

Performing at nearly 200 events each year, Jimmy continues to headline festivals and Parrot Head events, perform at major resorts, beachside tiki bars, corporate events and private functions, and clubs throughout the U.S.. Armed with a significant and loyal following, you can expect to hear high-energy island-style covers by artists like Kenny Chesney, Zac Brown, Bob Marley, of course tons of Buffett, both popular and obscure, and a long list of creative originals peppered in throughout the shows.

Find out more at http://jimmyparrishonline.com/