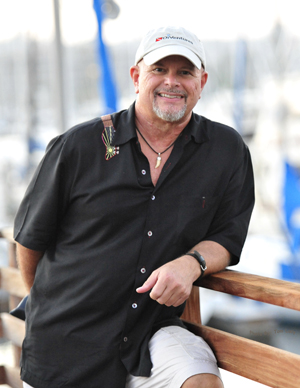 Kelly made a living at music for 15 years before starting to write songs. Now 5 CDs later with songwriting awards, an Album of the Year award from the Texas Music Awards as well as nominations for Entertainer of the Year & Producer of the Year- he is living a dream!

He currently resides in the Clear Lake/NASA area of Houston near Galveston Bay and many of his songs reflect the Gulf, Boats, Islands, Sailing, Beaches, Buffett , Belize and his years as a yacht broker. There are also fan favorites about Life , Love, Guitars, Daughters & Mom & Dad!

Touring either solo or with his band he travels Coast to Coast as well as Belize, Mexico & Canada – he does House Concerts, Private events, Festivals & Concerts performing his own uniquely Gulf Flavored songs.

Find out more at http://www.redfishisland.com/home.html