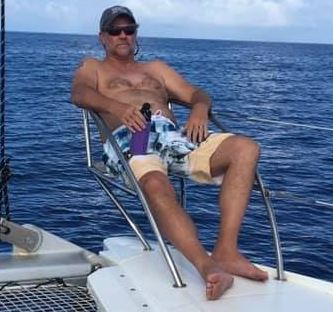 Craig was introduced to what would become Trop Rock music listening to his roommate’s Jimmy Buffett CD’s while they were students at New Mexico State.  His love for the sea lead him to the Navy after college and, as a young Naval Officer, his appreciation for songs of the sea only grew. Fast forward 20 or so years later and his involvement in the Parrot Heads of New Mexico introduced him to his first house concert…in his own backyard nonetheless!  From that first night, singing songs and smoking cigars with Bob Karwin and friends in his hot tub to years hosting house concerts with artists from Hawaii’s Whale Shark, to Jim Morris, Sunny Jim and Donny Brewer, Craig is all in when it comes to the Trop Rock family.  He and his wife Jill (a Trop Rock artist herself) decided to go big and expand their backyard venue in 2019 to a full stage, light and sound system and arguably the best Tiki Bar in the land-locked shores of New Mexico.  They now host some of the biggest names in Trop Rock in their little dessert music oasis, Casa Brown, and continue to live and promote the Trop Rock lifestyle.  When travel plans pull him back to the sea, Craig enjoys sailing on catamarans anywhere in the Caribbean and the South Pacific and introducing his travel companions to his favorite Trop Rock artists.