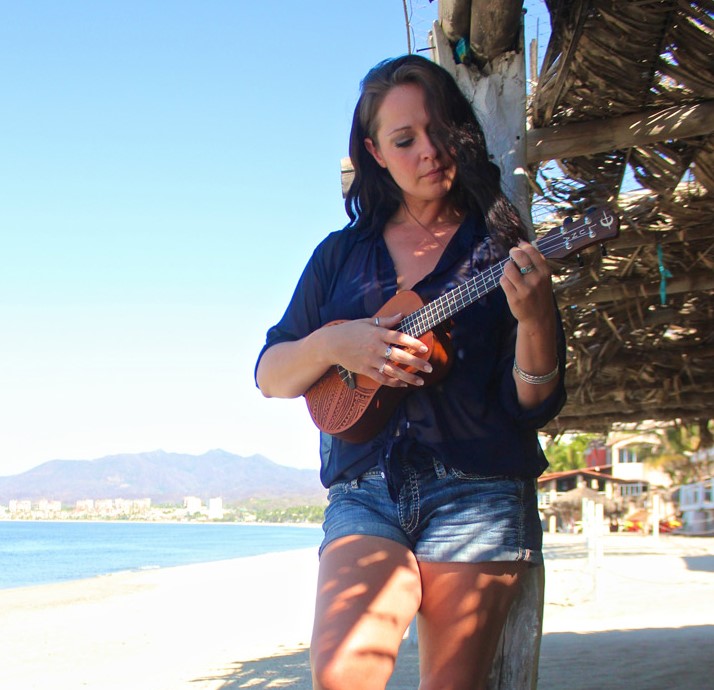 Brittany Kingery has found her beach. And she hopes that her music will lead others to find their beaches, both literally and metaphorically speaking.

A few months after the release of her 2013 debut CD Edge of the Ocean, the McCleary, Washington-born singer started practicing what she preaches in her music. She quit her secure government job, packed up her ukelele and a dream and moved to Bucerias, a small fishing village near the Mexican resort city of Puerto Vallarta.

Ready now to release her second CD Dream in Blue, she will do so as not only a legal resident of Mexico but as a full-time musician who played over 100 dates South of the border from November through April before shutting it down to come back to the U.S. to complete the new album.

“This last year has been a crazy time in my life, but all in a good way” says Kingery. “Like a lot of people, I was spending my time and energy worrying about money and health benefits and retirement planning and all that stuff. I realized that I was spending my life treading water and distracting myself from just trying to be happy today.”

When she first released Edge of the Ocean, Kingery recalls, the expectations for the project were modest. Her bandmate and producer Rob Morgan Hill approached her with a proposal to record a CD to raise money for a Mexico-based charity after he was appointed to the group’s Board of Directors. Most of the songs on the album were about life in Bucerias, so the plan was to market it primarily to tourists who would purchase the record as audio souvenirs of their vacations and to support the local charity. (The charity collapsed just before the record was released, so Kingery has since adopted other charities in its place). But the music video for her song “Treasures” caught the attention of one internet radio station after another, primarily of the “trop rock” – short for tropical rock – variety. And before long, several songs from the album were in regular rotation and people were taking notice of this singer, whose stellar voice alternated between sweet and soaring.

“We were sometimes using the term ‘tropical rock’ to refer to our music just because we got tired of telling people we played a blend of beachy country and rock and reggae and Latin music,” Kingery recalls. “We identify with artists like Kenny Chesney and Zac Brown and Colbie Caillat, but we didn’t know there was this whole world of independent trop rock artists and fans out there until after the album came out.” And that world quickly and warmly embraced her, most notably with a nomination as Best Female Vocalist in the Trop Rock Music Awards just months after the release of her first album.

“That was a tremendous honor and a surprise,” says Kingery, who by the time of the nomination had just made her move to Mexico. “I don’t really see myself as being in competition with other artists, so awards make me uncomfortable, but I had just given up my day job and moved out of the country to become a full time musician, so there was something really validating and affirming about that nomination.”

After settling in and rehearsing a band to ready herself for the tourism season, Kingery performed about 100 times South of the Border between November and April before returning to her home state of Washington to complete work on Dream in Blue, produced by Kevin Johnston, Rob Morgan Hill and Rob Thorworth. Kingery says the making of this album was both a challenging and rewarding experience. “I was much more of a participant in this album than the last,” she explains. “Besides co-writing several of the songs, I was involved in production decisions to a much greater degree. But I also trusted my producers when they wanted to drag me out of my comfort zone and into some territory I hadn’t anticipated venturing.”

That territory included, on one side, the sassy country-rock treatment of her song “Tequila Talking”, and on the other side the very nautical flow of her ballad “One With The Ocean”.“There’s no doubt that this is the best work I’ve done,” Kingery says. “I know I’m proud of it, and I think people are going to enjoy it.”

Aside from the tropical and beach themes that run through the record, Kingery says there is a lot of variety on the album, from the rocking guitars and horns of “Tequila Talking” to the upbeat country pop of “Little Miss Sunshine” to the chilled out ballad “Dream in Blue” to the reggae anthem “Rhythm of My Love”. There are even a couple of cover songs – a simple guitar-voice production of Stephen Bishop’s “On and On” and a rocking treatment of Leo Sayer’s playful “You Make Me Feel Like Dancing”.Kingery says if she could put her fingers on the overall theme of the album, she would point to two lyrics. In the yearning ballad “Sayulita”, named for a Mexican surf town near her Mexico home, Kingery writes: “It’s time now for a change of plans / we need to take some chances in our lives”. And in the autobiographical “Rhythm of My Love”, she sings “It’s funny how some people fear a future with so many things that could go right.”“Those lines just reflect where I am in my life right now,” Kingery reflects. “A year ago, I had a government office job and was performing locally once in a while. There was nothing wrong with it really, but like a lot of people, I was focused on things that really don’t matter much in the big picture, and I don’t think I even knew how stressed and unimaginative a life I was living until I left it. At the time, it was scary to walk away from all that security and stability, and maybe someday I will go back to it, but for the moment, I can’t see myself living a life that isn’t full of music and sunshine.”

While she says she’d be happy just to have people enjoy escaping into her music, she also hopes that both her music and her experience will inspire others to chase their own dreams and to find their own “beaches”.

“I’m not saying everyone should quit their jobs and move to beach towns,” she explains. “But I would definitely recommend the experience of turning your life in the direction of your dreams.”

Find out more at http://brittanykingery.com/