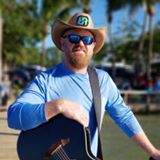 Donald James is a Texas Country and Beach Music, Trop Rock artist known as the Third Coast Cowboy. He loves to write songs, play music and fish. He says he’s a musician with a fishing addiction. DJ’s music is a blend of his Honky Tonk Hero’s, Rock and Roll fantasy’s and his soulful love of the Beaches and Oceans. With songs like Steppin’ in Texas Time, Salty Strings, Castaway, Dance Live Love Lose Control, Flip Flop Time, Beat Down Tore Up, These Wheels, and Phlock and Roll, he gets you two stepping on a dance floor, rocking and rolling with your hands in the air and kicking back with your toes in the sand and wind in your sails. He quite often plays all the instruments on his new songs, does his own production and mixing and mastering. Give this versatile “Country Boy” with a “Rock and Roll Ocean Soul” a listen!

Find out more at https://store.cdbaby.com/Artist/DonaldJames1