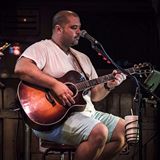 When Dillard was growing up on a small farm in Thaxton, MS, he had limited access to a variety of music. An old vintage cabinet record player, a handful of Gospel and Elvis Presley records, and the best of Time Life’s 50’s/60’s rounded out the family collection. Perhaps the biggest musical influence, however, was the ringing of Bluegrass instruments through the clean, country air from the Buttermilk Springs Bluegrass Festival held annually in Thaxton every Summer. These various styles and genres of music would spark the fire that would lead Dillard to becoming a national multiple award nominated singer/songwriter.

Dillard’s musical prowess would be cultivated at Northeast Mississippi Community College in Booneville, MS where he performed in several nationally recognized scholarship groups as a singer and musician. Here, he would receive tutelage from some of the top professional instructors in North Mississippi and meet several lifelong friends that he still actively performs and writes with.

While working on his Bachelors degree in Secondary Education/Coaching at the University of Mississippi (Ole Miss), Dillard would perform with various popular cover bands, honing his skills as an artist, performer, and writer. Dillard would graduate from Ole Miss in 2001 with various teaching certifications in Social Studies, Physical Education, Health, Special Education, and Music (Vocal Performance). In 2005, Dillard would complete his Masters degree in English through the University of Phoenix (Online).

Dillard released two albums with Bliss and Busted Screen Door before releasing his first solo album in 2013 titled, “Trapped In Paradise Again,” which led to him being nominated for several nationally recognized awards by the Mississippi Music Awards, Artists Music Guild, and Trop Rock Music Association.

“Greg Dillard’s debut album, “Trapped in Paradise Again,” is an instant hit. Trop Rock/Country/Americana, or however you decide to label it, you must get your hands on it.” (Trop Rockin’ Magazine, November 14, 2013)

Greg Dillard’s debut album, “Trapped in Paradise Again,” is an instant hit. Trop Rock/Country/Americana, or however you decide to label it, you must get your hands on it. The album starts with “Trapped in Paradise Again.” This is one we can all relate to in our day to day lives. “Out of My Life” and “Part of You” are both soul searching songs with beautiful lyrics. “T.U.I.” is a whimsical song that unfortunately some might be victim of. There’s no point in speculating whether it’s a success will be based on quality; what we have here is a case of widespread crowd pleas ability, which the album has in slabs. (Sheena Barnett – The Daily Journal, January 2, 2014)

“Trapped in Paradise Again”, Greg Dillard’s first solo Trop Rock CD, should be in your musical collection. The high degree of talent and professionalism places it above the level of other male Trop artists’ releases for 2013. The music and lyrics will do what they’re supposed to. You’ll feel like you’re in a tropical paradise, having the vacation of your life.” (Don Winfield – The Shore, December 4, 2014)

Dillard released his new album, “A Better Life,” in the Summer of 2016 to head up his first Texas Tour.

“GregDillard’s new album ” A Better Life” brings his talent as a songwriter to fruition. His unique style of singing clearly separates him from other artists.
This is Greg’s best work to date, you want be disappointed” (Danny Lynn – Tiki Man Radio, November 28, 2016)

Find out more at http://gregdillard.com/